Alabama caves are some of the best caves in southeast an attracts cavers from all over the world each year. Alabama is the perfect destination if your love caves. Alabama offers the perfect ecosystem for caves and there are caves all throughout north Alabama. Alabama has three National Wildlife refuges and two state parks with caves and caverns.

Here is a list of some Alabama’s Caverns and Caves

Stephens Gap Callahan Cave Preserve: One of the most amazing small caverns in Alabama is Stephens Gap Callahan Cave Preserve . You will hike roughly a half a mile to get to the cavern but it well worth the hike. You will be amazed at a beautiful waterfall falling deep into the cavern. There is a bottom entrance where you can hike inside and view the waterfall as it falls 150 foot deep into the cave. This is must see cave that is located near Woodville in Jackson County, Alabama

Manitou Cave: Once visitors from all over would would visit Fort Payne, Alabama and Manitou Cave. Most people these days don’t even know that Manitou Cave was once a booming attracting here in Dekalb, County Alabama. Manitou Cave is now closed to the public and has been for many years. There seems to be a great effort at preserving the cave and the history surrounding it. In 2016 a non-profit was formed to establish more resources and more commitment to preserving Manitou Cave. It is possible to visit the cave by appointment only. You can learn more about the history of Manitou Cave

There are a total of 12 Cave Preserves in Alabama managed by the Southeastern Cave Conservancy, a 501(c)3 nonprofit. 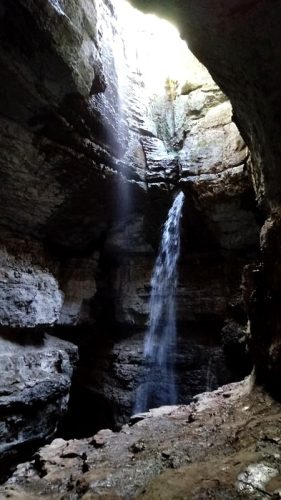