Six seceding Southern states Delegates met on February 4, 1861 at the The First Confederate Capitol. Jefferson Davis was inaugurated on the west portico on February 18 1861 a day later. The Capitol would remain a meeting place for the Confederate States until May 22, 1861. Before long the capitol was moved to Richmond, Virginia..

Episcopal Church of the Nativity 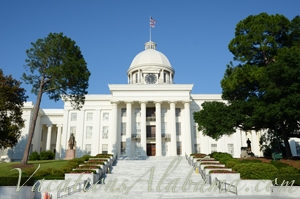